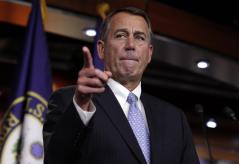 Here it is: the bill the senate passed, and now its on to the house.  I read most of it.

The "American Taxpayer Relief Act of 2012" is a compromise, but its pretty much what we thought it would be.

·      The level at which tax rates will go up is $450k for families $400k for individuals. Not the $250k/$200k limit initially discussed. Capital gains and dividends rates go up for these people too.
·      Estate tax stays at a $5 million applicable exclusion amount, but the rate above that goes from 35% to 40%. The exclusion amount will go up, as it is indexed for inflation.
·      Personal exemptions and itemized deductions are phased out at $300k for a family, and $250k for an individual.
·       Mortgage interest deductions, tuition deductions, stay in place.
·       Unemployment will be extended for a year.
·       There are extensions for medicare/aid, clean energy companies, agri-business, indian owned businesses.
·       Payroll tax cuts were not extended.

Income taxes go up, but it won't affect many people. Payroll tax cuts will affect a lot of people. Most everything in this bill just kicks the can down the road, a year or two, a month or two, we will have this battle again. We still don't have the budget cuts needed to pay down the national debt.

And the real kicker: the house swears in a new batch of representatives on Thursday. So, if they don't pass this by Thursday, we start from scratch. Again. Make it happen, Boehner.
Posted by JP at 2:39 PM