Sounds spooky, right? Sound eerily similar to the Smash 1995 hit, Hologram Man? Does it make you think of the resurrection of Hologram Tupac at last year's Coachella concert? (warning, explicit lyrics coming from Hologram 'pac. However, it was pretty amazing.) 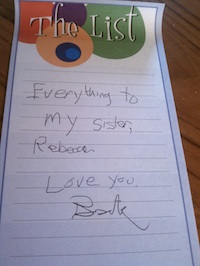 In Texas and many other states, there are a variety of things that pass for a will. According to the Texas probate code, a "holographic will" can pass for a valid last will and testament if it is written, and signed, "wholly in the handwriting" of the testator. They changed the handwriting part because the old statute just said writing, which led to the case where a fully typed out will being deemed valid, with even the signature typed out. Those are easy to forge, so they changed it.

What this really means: You can take a crayon, and write your will on a napkin. Really. According to a bunch of people and what I still cannot track down as a relevant source, a guy wrote "all to wife" on a bedroom wall, and this counted as a holographic will. A farmer in Canada allegedly scratched his will into the fender or a tractor, as he knew he was going to die. This worked.

I have also seen a husband and wife try to do a "joint" holographic will. You can do a "joint" will, if it is executed with all the formalities of a witnessed, attested normal will, but this does not work for a holographic will. Think about it: whoever did the writing of the "joint" holographic will and signs their name has made a valid will. However, the extra signature of the spouse makes the will fail because it is not "wholly in the handwriting" of the testator. (see Roberts v. Drake (Civ.App. 1964) 380 S.W.2d 657 if you want to read about the story there).  Then you're stuck, and your estate passes by intestate succession. (see my earlier post for what that means.)

But don't do this. I don't recommend holographic wills, mainly because they end up being more expensive for your estate than if you just paid someone (a lawyer) to do one. You have to "prove" the will in Court after you die, which requires witnesses, and usually a lawyer to quarterback everything. However, sometimes you just can't wait.

IF you must do a holographic will, take out a nice pen and paper, and do it right. Sign your name, and date it. Write out "this is my last will and testament, and I revoke any other prior wills by this writing." Then say what you want to happen.