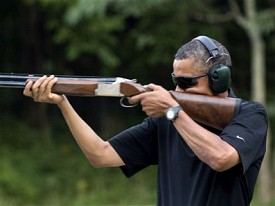 If you haven't heard already, the President took the path of Executive Action to continue his attempts at so called "gun control", this time taking action against gun trusts. If you don't know what a gun trust is, my previous post will catch you up.  Since Congress did not act, the President could only use executive orders, and that means it only affects NFA (National Firearms Act) items. Those are silencers/suppressors, short barreled rifles/shotguns, and machine guns. As I understand it, this will not affect normal shotguns, pistols, rifles, or even the much maligned AR-15.


The text of the new  proposed rules can be found here. It is long, so I'll summarize:
Thoughts:
First off, "Responsible person"  will include the trustees, beneficiaries, settlor, grantor, basically everybody who possesses, directly or indirectly, the power or authority, under any trust instrument or other document, or under state law, to receive, possess, ship, transport, deliver, transfer, or otherwise dispose of a firearm for, or on behalf of, the trust.
This is silly. Allegedly, the "White House" said that "At present, when the weapon is registered to a trust or corporation, no background check is run,”.  If this is so, why does it take (by current ATF estimates, as of this afternoon) 9 months to process the application? I do not believe that they are not already checking every associated name on a trust or other document. If that is the case, what are they really doing here?
Next, I do not know of any dealers that do not run the NICS (national instant criminal background check system) on a person who wants to buy an NFA item. This is the same background check as you get for any other gun.  I am sure some are out there, but that is the first line of defense. Next, the ATF has the name and address of the people that are applying, it is just simply not feasible that they are not running the checks already.
What this really means is that its just an added pain to get fingerprinted, get a passport photo, and get the chief of police or your sheriff to sign off on every application. What's great is they estimate the time and cost of this...several hours of time for the applicant, about $40 extra, and millions in costs for local communities and the feds. In some communities (San Antonio is famous for not signing any applications) this will be a defacto ban on NFA items. In others, it is just more of a nuisance and time consuming.
What I don't understand is why you wouldn't just list 1 person on your entity, then add the others later, depending on what this magical Form 5320.23 requires. As of today, it does not exist on the ATF Form database.  Also, I think a trust can be tailored to make just the settlor the "responsible person," but that will ultimately be up to the ATF.
More thoughts:
I understand political agendas. I think with the tragedies that we have seen over the past few years, we needed a measure of gun control, but that is on the background check end.  Close the "gun show" loophole. That is just fine.  This does not do that.
If gun stores and dealers are not running background checks before they sell NFA items, then they should have their licensed revoked, and they should be prosecuted. This does not do that. This is not gun control. This makes it more difficult for legitimate gun owners to legally acquire legal items. The ban on importation of gun used in foreign countries? How many Korean War M1 garands do you hear about in violent crimes? Again, a waste of a law and an unnecessary restriction on a collector who would otherwise be spending money and putting it back into the economy.
Summary:
This will do little to keep items out of the wrong hands. All that had to be done was for the ATF to do "officially" what I have no doubt they are doing "unofficially" which is to just run a background check on everyone who applies. That is not hard. This is just pushing toward a complete ban of these type of items.  I encourage people on both sides of the gun debate to get involved in the public comments for this proposed rule. This does nothing to stop the violence that claimed lives at Sandy Hook, or the tragedies in Colorado and elsewhere. All this does is require the legitimate firearms owners to submit more personal information to the government, at a higher cost to the individual and the taxpayer.
Let's hope the powers that be can change this one before its set in stone.
Posted by JP at 3:45 PM