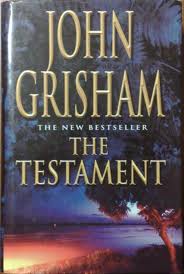 Maybe I am a sucker for John Grisham books because I like to believe there is still some romance and adventure in being an attorney. Nevertheless, "The Testament" was and is a good primer on the background of what a will contest can be, and how crazy it can get when things go awry.

For those who haven't read it, here is the quick summary (sorry, spoiler alert):  Troy Phelan, a reclusive billionaire, has a big will signing ceremony where he leaves his estate to his several children from various marriages. He video records it and has prominent doctors adjudicate that he is perfectly sane. Unbeknownst to anyone but he and his personal lawyers, he then executes another will, that only leaves his rotten kids enough to pay off their debts, leaves the rest to an illegitimate long lost daughter Rachel (who happens to be a missionary in remote Amazonia), and jumps off the balcony of his building, to his death.

The rotten kids lawyer up,  fight and squabble, and try to contest this last-second will. Phelan's lawyers send a sympathetic-recovering-alcoholic partner from their high-dollar lawfirm to the jungle to find the missionary daughter, and the chaos plays out.

In the real world, will contests happen everyday, even more so when there are significant dollars involved, but people will fight over anything (dad's ole' straight razor was the subject of tens of thousands of legal fees in one case). Aside from fraud or forgery, the main ways to attack a will are:

Failure of execution: someone didn't properly sign or witness the will. If you are in a different room, signed in the wrong order, etc., you can mess this up and the whole thing will becomes invalid.

Lack of Testamentary Capacity: you can be insane one day, and still have the capacity to sign a will the next. Its a low threshold, but the general requirements are:
This one is tough to prove, and depends on who and what the probate judge will believe. There is also a theory of "lucid interval," where the otherwise incapacitated person wakes up for a minute or an hour, decides he wants to change his will and does, then reverts back into his low mental state. This is most common in those suffering from Alzheimers or dementia. Sounds crazy, because it is crazy.  However, the courts presume a validly executed will is just that, valid, so you really have to go above and beyond to prove this.

Undue Influence: This is the sexy one. This is where the little old person falls in love with their nurse or home health assistant, or gets married to a former playmate of the year. Sometimes there will be a new will, sometimes their won't, but these are where the fights get dirty.  The basic elements to look at here are:

From an unbiased level, who should inherit the old man/woman's billions? The 26 year old adult film star, or the children? The answer may seem simple from a "fairness" standpoint, but you never know all the facts. Were the children given "enough" already? Did they not take care of their elderly relative, or did they have a falling out? At the end of the day, it really doesn't matter. This is America, and in America, you can leave your billions to your kids, your mistress, the Tea Party, or your dog, as long as you don't violate one of the above tests.


Here is some food for thought: 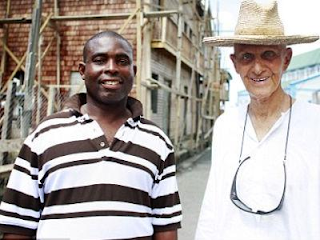 According to www.theroot.com, the gentleman in the hat, an aptly named "Lord Glennconner" has left his millions to his manservant (seen in the picture) changing his will just seven months before his death, disinheriting his 17 year old grandson and his widow.

Would it change your mind if you knew that Kent Adonai worked for Lord Glennconner for 30 years,  slept at the foot of his bed, walked his pet elephant, cooked and cleaned, and was the one trying to revive Lord Glennconner when he suffered his fatal heart attack?

The lesson is never judge a will contest by the will itself. You have to dig much deeper.

If you or a loved one have experienced any of the above situations, please contact an experienced probate litigation specialist to help represent your interests.
Posted by JP at 11:26 AM