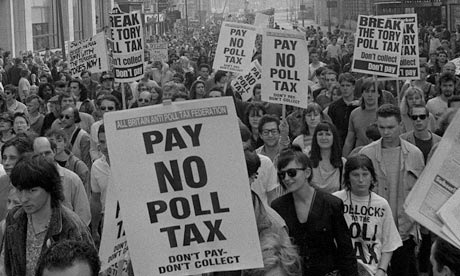 We are not speaking of the POLL tax, or the requirement of a fee to vote in elections, the Jim Crow-era attempts by some states to prevent minority groups from exercising their new 15th Amendment given right, which existed nationwide in federal elections until the 24th Amendment was ratified, and what took the  Harper v. Virginia Board of Elections decision to make the use of such taxes unconstitutional in state elections 1964.
No, this time its the POLE that is making the news.
In 2007, the Texas legislature enacted the Sexually Oriented Business Fee Act, of which,  Section 102.052(a) states: “A fee is imposed on a sexually oriented business in an amount equal to $5 for each entry by each customer admitted to the business.”
A “sexually oriented business” is specially defined as a nightclub, bar, restaurant, or similar commercial enterprise that:
It's only $5, right? Where it gets dicey is that the money goes to something called "the sexual assault victims fund", which seemed to imply that strip clubs cause sexual assault, and more specifically, "rape, sexual assault, prostitution, disorderly conduct, and a variety of other crimes and social ills ."
Naturally, strip clubs were up in arms, and claimed their First Amendment freedom of speech rights were being violated. This issue made national news then, but the fight was still up in the air until last week.
On August 26, the Texas Supreme Court reversed the Court of Appeals and held that the tax was constitutional. Here is what they reasoned, (paraphrased):
The full text of the opinion can be seen here.
In purely legal terms, I think the argument is a stretch, and does single out a specific class of people or businesses, and the excuse of a "de minimis" impact on protected speech to further the legitimate state interest of limiting the evils of what happens when there is nude dancing and booze just is not a good enough legal argument.
In reality, the legislature, like many or legislatures, is trying to find money from anywhere it can as states are broke, roads need paving, jails are overflowing, and schools can't pay teachers. So they decided they could pick on strip clubs, a likely unpopular villain in a conservative state. I don't blame them for this, and I can't really blame the Supreme Court for going along with it. However, that's not the Supreme Court's job.
Also in the opinion, was that "The Comptroller estimates that there are 169 (strip club/erotic dancing clubs that allow alcoholic beverage) businesses in Texas." I honestly thought there would be more, but its the number they named. The New York times claimed that lawmakers hoped to raise some $44 million from the tax.
If my math is correct, $44 million / $5 = 8,800,000 prospective strip club attendees per year, in Texas.  Divided out between each establishment, amounts to an average of 171,598 patron's per club per year, or just over 142 patrons per club per day. Including Christmas, and Sundays. Maybe I am in the wrong business.
Either way, 8.8 million is not a majority of the nearly 26 million Texas residents, so even if every strip club attendee, assuming each person only goes one time per year (which is a terrible logical fallacy, but just for illustration's sake) votes against their current state representative, they are all safe to get re-elected.
From a policy standpoint, I see motivation behind the "statutory fee." I just don't like the way they legally justified it. Lets hope they get certiorari, I'd love to see what Scalia says on this one.
What do you think about the law?
Posted by JP at 1:04 AM